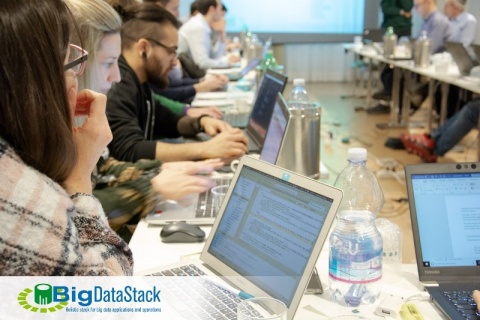 This project envisioned a task with the focus on increasing the impact of research activities as well as increasing its sustainability, making innovation easier:

This European open source initiative is actually an effort from Red Hat to provide their expertise on how the research outcomes in Europe can be actually exploited and not simply dropped on an open repository. This was already present in an informal way in other EU research projects where Red Hat participated (Orbit and Superfluidity). This time it has been done in a more formal way, where Red Hat has coordinated this effort with two main objectives:

One of the common misconceptions is that Open Source is about making your code public. While this is one of the pre-requisites, that alone does not make it a “real” open source project. If nobody is checking/using your code, the fact that the code is open does not mean much. To fully embrace the open source way, and increasing the chances of making a successful (widely used, supported) project, you need to create a community around it.  There are a few extra steps to keep in mind that will lead to a more successful result than just adding your modifications to your own fork of the project:

When you engage with an existing community, and you build on top of it, there is a greater chance for your idea to be exposed, more people are going to contribute to it, and get the benefits of being “open” –  aka your project to become a successful one.

The process to achieve the above points, leading to public release of a software artefact are not seamless though. Advice and feedback may be needed to achieve a remarkable result in terms of the exploitability of the produced software. In fact, for people not used to it, it can be frustrating due to the extra time and effort needed (https://assafmuller.com/2016/12/02/upstream-contribution-give-up-or-double-down/) — which should pay off at the end anyway. For this reason, we have initiated the European Open Source Initiative.  Given that Red Hat has the know-how and it is highly engaged in many upstream open source communities (kernel, OpenStack, Kubernetes, OpenShift, …), through the European Open Source Initiative, has helped other partners to identify relevant communities for their components as well as the standard way of coding/working with them (e.g., the current trend on containerization and application management through operators).

As part of the Big Data Stack project, through the European Open Source Initiative, we have:

The process for partners not usually following this model is usually longer than for partners already familiar with this process (such as Red Hat or IBM). However, with the main objective of increase adoption/impact as well as maintainability after the project ends, many partners had onboarded on this and targeted open source communities for their components, following the similar existing projects (e.g., Sandbox projects), as well as the current standards for software development and deployment.

Even though this process takes time, and full open source contribution could happen actually after the project finishes, some outstanding contributions has already been made:

To conclude this blog post, there is another example of a success story that happened in a previous project, and where upstream contributions were finalized after the project finished. It was at the Orbit EU project. In this case, the feature to implement was “post-copy live migration of VMs” and it required modifications at the different level of the stack (from lower to upper layers):

In this development, and during the time frame of that project, Red Hat completed and upstreamed the features for the first two layers (Kernel and Qemu). However, Red Hat also collaborated with Umea University and helped them in the development of Libvirt and OpenStack extensions. Red Hat mentored the people involved from Umea University in the way to approach both Libvirt and OpenStack communities to get the features merged upstream. This eventually happened right after the project finished (less than half a year after). This has ensured the feature is still supported by OpenStack (more than 4 years after) and many users/customers around the world could rely on them (some even transparently) on a daily basis.

More and more companies are adopting the Open Source development model. A lot of the innovation in the world is happening in the Open. The European Open Source Initiative is a way to onboard more and more companies and researchers on this journey, to ease their way in, and to benefit as a society from collaboration and transparency. We believe in this model and we are pushing to make it widely acceptable.